The student enrolled in acoustic guitar lessons- folk rock, folk, bluegrass, country, and acoustic blues- will learn the guitar chords in the keys common to their style of interest, the strum patterns that convey that style, as well as flatpicking, finger picking, direct chord substitutions, and bass walks. This chord vocabulary and technique is applied to music of the student’s choosing. As he/she develops interest, the music theory or relationship of chord, scale, and key, is explained.

B Sharp Studio offers electric bass students an opportunity to play with others in our rehearsal room, and the chance to perform publicly. Bass students are encouraged to acquire a right hand technique using alternating fingers and using a flat pick; both have their virtues. The bass player is constantly dissecting a chord progression knowing not only where is the root, but where is the 3rd, 5th, and 7th, and other harmonic variations. He/she must know how to move scale-wise (walk) from one chord root to another, and which notes of a chord deserve more attention.
I encourage young students to learn to read bass clef. Others may prefer to learn by playing, gaining new technique and musical information from each song added to their repertoire. Some students do well with a semi-formal approach by increasing all aspects of their musicianship without reading music.

Classical is a style of western music that came to prominence in Europe, and by the mid-20th century was embraced by serious musicians around the world. Gavotte, Bouree, Prelude, jig, are a few of the musical forms transcribed for or composed specifically for the guitar by Bach, Sor, Tarrega, and others. The character of classical music varies distinctly through each artistic era. The non-player is often impressed by the ability of a classical guitar in the hands of a single player to sound like two and even more. Beethoven said, “The guitar is a little orchestra.”
Classical guitar demands the greatest degree of technique. Fine cooperation between the right and left hands is gradually acquired and reading music is necessary to gain any sizeable repertoire.
Still there is plentiful music for the classical guitar beginner, advanced beginner, and intermediate player as well as the advanced guitarist. The Classical Guitar video ventures a Courotte by J. S. Bach. 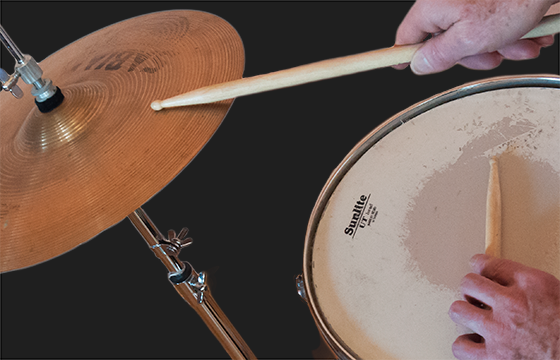 B Sharp Studio offers drum lessons at beginner and intermediate levels. The advanced level drummer comes to B# to hone his/ her skill playing with other musicians.
At B Sharp Studio students play in ensemble (together) drums with guitar, often from the first lesson.
A drummer is a quadrapus; first developing rudimentary separation of the hands and feet, working with whole beats, then subdividing the beat, then beat partials, until the student doesn’t have to think so much about it. The student looks at what a beat pattern looks like in manuscript, writes the beat her/ himself and plays it, slowly allowing the brain to download this new “software.” Then we play together, guitar with the drums in simple and compound meters, and in shuffle or swing tempo.

A fantastic music of culture clash. East Indian and European sounds collided in Spain when the sudden explosive rhythms of India were applied to the guitar. The gypsies invented exciting techniques for the right hand that attack and alarm. The guitarist spends months in the woodshed mastering the rasgueo fan and tremolo.
The face or sounding board of the flamenco guitar is sanded thinner than that of the classical guitar, producing a brittle timbre; traditionally the back and sides are of cypress.

Jazz happened in America when African rhythm collided with European harmony. It is a music charted for the band, and improvised by the soloist. A Jazz musician is not satisfied with simple harmony or three chord tunes.  The jazz guitar player takes solos, the melody of the song appearing with extra notes and rhythmic variety not expected from a singer.The Jazz guitarist has a broad chord vocabulary. As well as the commonly used chords derived from the diatonic scale, the Jazz player will use chords derived from the chromatic scale, and  his/her abilities often include the chord solo, and the combining of chords with melody.   See Music Theory, under the MUSIC INFORMATION page; also Guitar Chords (same page).