Music Theory for the Guitarist / Bassist / Drummer
an Introduction 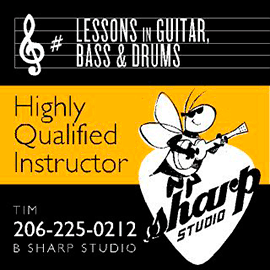 Examining the parts of music, and the combining of those parts, is a study called Music Theory. A person studies Music Theory rather than Music Law because art is flexible and laced with exceptions. Nothing stops the composer or improvising musician from bending the conventions of the day. Still for 1100 years Western music has been created with a twelve-tone system, and a functional understanding of that system lends a guiding hand to the performing and composing of any style of music the student pursues. A musician plays with head and hands.

In lessons at B Sharp Studio the concepts scale, chord, key, and meter are interwoven, and an important understanding of Music Theory is acquired as a student applies it to the music of his or her choosing. A deeper study of Music Theory is possible as a student advances, and it’s value becomes evident as does mastery as a player gains experience.

Hands-on experience brings the concepts to the conscious level, while practice makes them second nature. The following musical principles are covered over time in guitar lessons, bass lessons and drum lessons.

A single tone, the atom of music, such as the note “C.” A note may serve as part of a melody, one in a string of pearls, as a root or other tone in a scale, or as a tone in a chord.

A scale rearranged and performed with a particular rhythm, and using all or a few of the key’s inventory of notes, is a melody: “A melody in the key of A minor.” “A singer sings the melody.”

Two or more notes produced simultaneously, whether perceived as pleasing (consonant) or displeasing (dissonant), is harmony.

A chord is three or more notes extracted carefully from a scale. A chord is harmony, specific harmony. The every other note rule of harmony applies. Notes “C” “E” and “G” taken from the “A minor scale” form a “C major chord.” A key has 3 minor chords, 3 major chords, and 1 diminished chord that all serve as the chordal inventory of a key.
The purpose of a chord is to support the melody. The guitarist strums a progression of chords or “chord progression” while a singer sings the melody.

A key is a collection or inventory of notes in a scale, with a focus on the note the key is named for. This key note is “A” in the key of “A minor”, or “C” in the key of “C major.” Rearranging all or some of the notes in the A minor scale creates a song in the key of A minor. Rearranging these scale tones another way creates another song in the key of A minor. Both songs will, with few exceptions, end with the singer singing the note “A” and the guitarist strumming the chord “A minor.”
By comparison, songs in the key of A major will end with the singer singing that same “A” note but the guitarist strumming the chord “A major.” A song may be composed in any of the twelve major or twelve minor keys. (For the record there are five other diatonic scales or modes that will not be covered here.)

A series of notes arranged in alphabetical order “A B C D E F G” that serve as the tonal inventory of a key; here the key of “A minor.” “Diatonic scale” refers to this 7-note ordered scale.

The 7 natural notes and the 5 sharps or flats combine to make a chromatic scale, and serve as the pitch inventory of our twelve-tone system.

Roman Numerals: The diatonic scale may be assigned roman numerals to designate the chords of that scale. Of seven notes in a scale each note serves as a possible root to a chord by the same name. Here in C Major:C D E F G A B / C are the 7 degrees of a scale. The reappearing C is called the octave, and may be called 8 or 1.
1 2 3 4 5 6 7 8 or 1
Chords are designated: I II III IV V VI VII and are used to refer to a chord progression in any key. I VI II V means a one, six, two, five progression is used to perform a song; “Blue Moon” for instance or “What a Wonderful World.”
A more descriptive method is to use small case numerals for minor chords.
I ii iii IV V vi viio. Here is seen clearly the I IV and V chords are major, and the ii iii vi chords are minor, and that the o following the vii chord marks it diminished. Now a I vi ii V progression is clearly in a major key.
i VII VI VII is clearly in minor. This common progression might be “All Along The Watchtower” or the last section of “Stairway To Heaven,” and A minor is played: Am G F G. In E minor it’s played: Em D C D.

Functions within meter, and is the pulse or feel of the music. Patterns develop and recur, yet an instrument or singer may display great rhythmic fluctuation within the meter as the song and mood develops.

Other aspects of music to consider:

timbre, or the ‘color’ or tonal quality of an instrument;
modulation, or the movement of tonal focus in a song, one key to another;
transposition, changing the key; and
composition, which incorporates all of these and more in order to bring songs to life.